Posted on 29 January 2013 by Fletcher DeLancey

Back in October, I posted about the research showing that dung beetles in desert environments can literally cool their heels by standing atop their balls of dung. Researchers tested this hypothesis by fitting little boots onto the dung beetles’ feet.

We now learn that the indignities visited upon dung beetles did not end there. Marie Dacke of Lund University (Sweden) has fitted them with tiny little visors, to test whether they can navigate by the stars. According to Science News:

Dung-rolling insects are excellent for studying navigation because they collect their prized food source and single-mindedly roll it as directly as possible away from competitors and predators. Putting the beetles in weird get-ups during experiments doesn’t deter them. “They are so attached to their dung balls,” Dacke says, “that under all circumstances they just want to roll the ball in a straight line.”

“Under all circumstances” includes being made to look like Darth Vader. 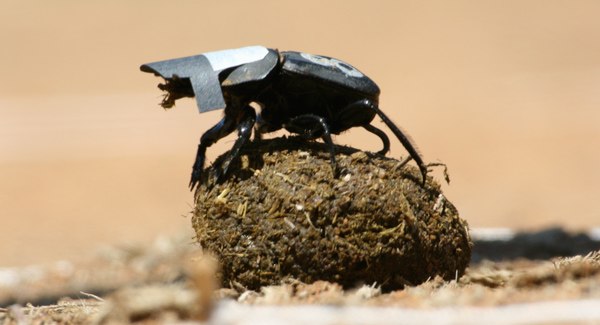 The upshot of the study is that dung beetles can indeed navigate at night, so long as they can see the Milky Way. This is a direct refutation of a paper published in 2003 by Dacke herself, whose prior experiments had showed beetles losing their sense of direction on moonless nights, even with a sky full of stars. Years later, she conducted another experiment and got a completely different result. So she did what anyone would do when they need a starry sky on demand for an experiment: she borrowed a planetarium.

With the planetarium dome darkened, the nocturnal dung beetle Scarabaeus satyrus fumbled and curlicued around. But showing just the Milky Way let the beetles kick along balls of dung in fairly direct paths.

Knowing that the dung beetles actually can orient by stars, Dacke realized why her earlier experiment had gone wrong: She had tested the beetles in October in South Africa, when the Milky Way was so low in the sky that the animals couldn’t get a good view.

That must have felt good! There’s nothing quite like the satisfaction of explaining a mystery. In the meantime, the much put-upon dung beetle has only enhanced its reputation as the most dignified insect around…no matter how we humans dress them up.

Socialist heathen and Mac-using author of the Chronicles of Alsea, who enjoys pondering science, politics, well-honed satire (though sarcastic humor can work, too) and all things geeky.
View all posts by Fletcher DeLancey →
This entry was posted in science. Bookmark the permalink.