Walking at the UBC

Posted on 7 October 2015 by Fletcher DeLancey

On our second day in Vancouver, my wife wanted to visit the anthropology museum at the University of British Columbia. So we drove there, and I became increasingly enthralled as we passed along the outer edge of the campus. The trees, the pathways, the beauty…I decided to take myself for a walk while the others did the museum thing. 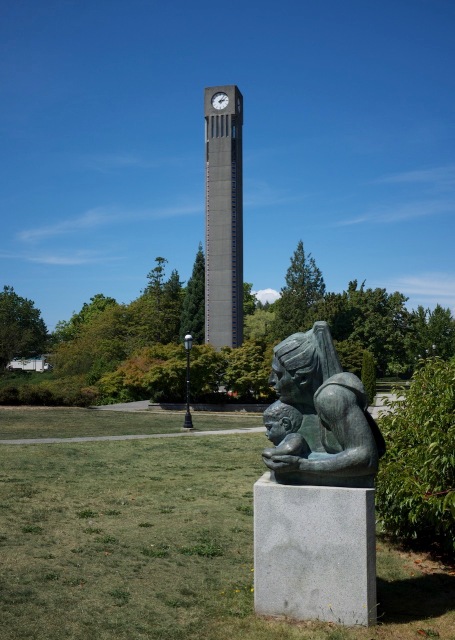 The clock tower must surely be in all walking directions given at UBC. “Just turn left at the clock tower and then go two more blocks…” It’s iconic and unmissable. And that statue of a mother and child — very unusual for a university campus. It made me stop and ponder.

From where I took this photo, I could see a distinctive glass roof rising over the trees. It was obviously one of the major buildings on campus, if not THE major building, so I went to see what it was. 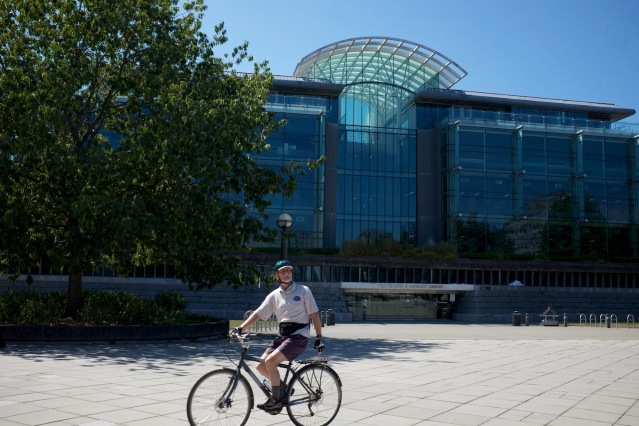 I thought, arena? Sports center? Football training center? I attended a typical American state university; sports are by far the most financed part of the university life. I couldn’t imagine it being an actual academic building.

It was the library.

But the place that really held me spellbound was this half log, mounted beneath a tree that had five very brightly painted birdhouses hanging from it. The birdhouses had signs on them, for wren, woodpecker, chickadee, finch, and sparrow.

I appreciated the metaphor of the birdhouses for various species, all in the same tree, here on a campus where students from all over the world come together to attend school. But what really moved me were the words on that half log. Here they are:

“The most surprising thing about coming to Canada was to see a person walking ahead of me and holding open a door until I could put my hand on it. Where I come from, people were taught to kill. The first thing they would want to do if they saw me was hit me with a machete. And then, just two and a half years later, the first person I see, their first concern for me is: Can I hold open the door for you? I don’t think anyone else at UBC was walking around feeling so amazed at doors being opened.” — Willy, Rwanda

“What is home? When I moved to Vancouver, I thought that home was a safe place, a place of prosperity. But now I understand that home is home because of identity. Home is home because of your people. I don’t call Vancouver home because my parents are not here, but it is a good place. I have gained many things since being here — knowledge, experience, a better understanding of how the world works. But, it is difficult to adapt to a new environment, to be what the environment wants you to be. You can experience challenges anywhere. People just collide sometimes.” — Makerduek, South Sudan

“Every time I think I might be taking my life for granted, I think about my parents. My father was a brilliant student at university and, just before he could graduate, they had to flee the country while my mother was pregnant with me. So, whenever I start to complain about university work, I think of my father and how he had to leave in the middle of his degree just because someone decided to start a war. My parents are proud to be immigrants; everything they have in Canada, they’ve created for themselves. I feel disconnected sometimes, when I realize how much other people take for granted.” — Tara, Croatia

“My parents have lived in the same house for my entire life. It’s a quiet place — the yard ringed with trees where birds nest, close enough to the ocean that you can smell the salt. When I was young, we acted as a host family to students from the international school who stayed with us during breaks and, sometimes, for years after they’d graduated. The house was always filled with different voices and different stories. It was there that I first realized how lucky I was. While so many others came from such difficult circumstances, I had nothing to run from, nothing to escape.” — Chris, Canada

I did not learn about the First Nation history of the area, as my wife and friends did in what sounds like an excellent museum. I learned something else instead, and had a wonderful, memorable time getting to know the area around the UBC campus.

And that’s not even mentioning the clothing-optional beach.

Socialist heathen and Mac-using author of the Chronicles of Alsea, who enjoys pondering science, politics, well-honed satire (though sarcastic humor can work, too) and all things geeky.
View all posts by Fletcher DeLancey →
This entry was posted in culture, travel. Bookmark the permalink.

1 Response to Walking at the UBC